“The future of humanity awaits in deep space,” said the chief of NASA Charles Bolden. Space exploration is a highly ambitious enterprise. It promotes international cooperation, and it produces thousands of inventions. But it is also about simple things, like growing a flower.
di Redazione
Per la lezione
Scarica il PDF dell'articolo
Scarica le soluzioni
Per scaricare questa risorsa devi accedere a myZanichelli
“First ever flower grown in space makes its debut!” tweeted astronaut Scott Kelly on January 16, sharing the photo of a zinnia flower. The tweet was sent from the International Space Station (ISS), orbiting at 250 miles (400 km) above the Earth’s surface. The experiment, an attempt to grow zinnia in space, began in November. It was a very difficult experiment. The astronauts of the ISS had to learn how to garden, and we’re not talking about normal gardening, but gardening in space! How do you water a plant in a microgravity where water does not flow but floats? And how do you grow a plant using only artificial lighting? The astronauts followed the instructions they received from a NASA ‘Veggie team’ back on Earth. The zinnia was grown aeroponically, meaning in a very humid environment without soil. A fan was used to regulate the humidity. Red, blue and green LED lights were used to simulate sunlight. But it wasn’t enough. Around Christmas, the zinnia plants looked like they were going to die.

Astronaut Scott Kelly decided to follow his gardening instincts. To help him, the Veggie team sent him a one-page guide called “The Zinnia Care Guide for the On-Orbit Gardener”. Kelly discovered that he had green fingers: his efforts saved the plants, and the zinnia flower bloomed. It was another success in space gardening. In fact, the zinnia flower wasn’t the first plant grown in space. It wasn’t even the first flower. Four years ago, on the ISS, astronaut Donald Pettit grew plants using plastic bags as pots. He grew courgettes (or zucchini in American English) and broccoli, as well as a sunflower. Pettit wrote about it in his blog, “Diary of a Space Zucchini”. Russian cosmonauts have grown (and eaten) many edible plants in space, such as onions, peas, wheat, garlic, lettuce and cucumbers. More experiments with vegetables are on the way. In 2018, NASA will try to grow a tomato plant. But what’s the objective of all this space gardening?

To the Moon, Mars and beyond!

Every few months, food supplies are sent to the ISS from Earth. This won’t be possible on longer-distance space voyages. If astronauts go to Mars, for example, they will have to be self-sufficient: they will have to grow their own food. NASA is planning to return to the Moon in the 2020s. A mission to Mars might take place in the 2030s. If you would ever like to go on such adventurous trips you could start by going to one of NASA's 'space camps'. There you can learn how to become an astronaut. Space camps include space simulations and space exploration activities. You also get to meet and talk to real astronauts. If you want to go to Mars, though, be warned: the first mission to Mars might be a one-way ticket. This means that the astronauts might have to live and survive on Mars without the possibility of returning to Earth. So, if you want to go, you will have to know how to grow your own food!

Like the ISS, the first trip to Mars will probably be an international enterprise. NASA collaborates with many other space agencies (including the Italian ASI). Together, they developed the Global Exploration Roadmap (GER). This project coordinates efforts to explore destinations, such as the Moon and Mars, where people will someday live and work. In the meantime, space exploration has already changed the way we live and work here on Earth. Have you ever used ear thermometers, cordless devices, water filters, scratch-resistant lenses, athletic shoes, satellite TV, or portable computers? Have you ever slept on a foam mattress? Then you have used products that were developed or improved by NASA for its space missions. NASA has helped develop more than 2,000 spinoff products. Even if you're never going to travel to outer space, there's already a bit of outer space in your life!

You can also read astronaut Donald Pettit’s blog ‘Diary of a Space Zucchini’:

Did you know that the ISS is the third brightest object in the sky? Track the Station:

Have you ever reflected on our place in the universe? Read about the 'Pale Blue Dot' picture and Carl Sagan's thoughts about it. Discuss it with your class.

https://en.wikipedia.org/wiki/Pale_Blue_Dot Would you like to go to a Space Camp and learn how to become an astronaut?

Here is somebody about your age who is already training to go to Mars! Discover the incredible story of Alyssa Carson:

Are you interested in the Global Exploration Roadmap? Here you can find an official document with lots of interesting diagrams and pictures:

1. The zinnia flower was grown by the astronauts. 2. A fan was used by the astronauts to regulate the humidity. 3. LED lights were used by the astronauts to simulate sunlight. 4. Peas, lettuce and cucumbers were eaten by cosmonauts. 5. Many spinoff inventions were developed by NASA.   4) Turn these active form sentences into passive. 1. Astronaut Scott Kelly sent an incredible tweet. 2. Astronaut Donald Pettit grew courgettes and broccoli in space. 3. At space camps astronauts teach children how to live and work in space. 4. Many space agencies developed the Global Exploration Roadmap. 5. Many people use ‘space inventions’ daily.   SHORT ESSAY

5) NASA is looking for people who want to go to Mars. Would you like to be one of them? Explain why you would like (or would not like) to go in a short text. (60-80 words)

6) Do you think you have “green fingers”? Write about your gardening experience and the advantages or disadvantages or growing plants at home. (max 100 words) 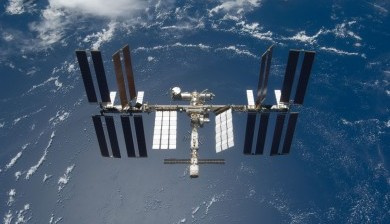