2020 marks the 100th anniversary of the women’s right to vote in the United States. When the US was founded, voting was limited; in most American states only men with property could vote. Eventually, all men obtained the right to vote, but women were still excluded. They were considered unfit or, even, too stupid to vote. Many women fought against these prejudices. They founded women’s activist groups. They organized conventions. The one held at Seneca Falls in 1848 produced a ‘Declaration of Sentiments’ that contained a list of grievances aimed at the American government. The lack of women’s suffrage was the first grievance. Indeed, the struggle was not just about the right to vote. Activist Elizabeth Cady Stanton even said that “I wasn’t ready to vote, didn’t want to vote, but I did want equal pay for equal work.”

Not all women were in favour of universal suffrage. There were anti-suffrage women groups that said that politics was a dirty business and women should not get involved. Also, they felt that women acting like men would destroy the family and promote socialism. These women were usually white and upper class; they were afraid that giving rights to the poor (men and women alike) would lead to the loss of their privileges. Others opposed to women’s suffrage included many brewers and distillers. They felt that if women could vote, they would make alcoholic drinks illegal. This is because the women’s movements fought many battles to improve society, and one of these was the fight against alcoholism. Some industrialists were also against women’s suffrage, because they believed (rightly so) that women would support the abolition of child labour.

In 1890 the National American Woman Suffrage Association was founded. It protested “against the present political organization of society, from which women are excluded.” Things changed radically when the US entered World War I in 1917. Many men were called to arms and had to leave their workplaces. Thousands of women substituted them in factories and offices to keep the nation going. In 1918 President Woodrow Wilson declared: “We have made partners of the women in this war; shall we admit them only to a partnership of suffering and sacrifice and toil and not to a partnership of privilege and right?” In 1920, the Nineteenth Amendment to the American Constitution was passed, granting universal suffrage. The US joined the other nations that had already granted women the right to vote. To name a couple, New Zealand had done so in 1893, Australia in 1902. In other nations, instead, women had to keep fighting, sometimes for many more decades.

What made this struggle so long and hard? Many aspects of American society favour men politically, economically and culturally. This was (and is) the case with many other societies. Even languages can have a male bias. To ease this problem, the European Parliament issued guidelines to change those terms that are “discriminatory because they are only used in the masculine.” Better to say ‘chairperson’ than ‘chairman’ (or ‘chairwoman’). Better ‘humanity’ than ‘mankind’, ‘principal’ than ‘headmaster’, ‘police officer’ than ‘policeman’, ‘artificial’ than ‘man-made’. The United Nations also has guidelines favouring gender-inclusive language and discouraging discriminatory expressions (towards both women and men) such as ‘Oh, that’s women’s work’, or ‘Men just don’t understand’. The fight of women for the right to vote proved, once again, that progressive political reforms are often determined by popular pressure. They are obtained not because politicians propose them, but because millions of people demand them.

1) Would you like to read the ‘Declaration of Sentiments’ of the Seneca Falls convention?

2) Watch this video on the history of the Women’s suffrage movement, from the writing of the ‘Declaration of Sentiments’ to the signing of the Nineteenth Amendment. Pay attention to the end of the video: who was still not allowed to vote in 1920?

3) Here are 10 reasons why some members of Parliament were opposed to women voting in the UK:

4) Did you know that the bicycle was an incredible ally for the women’s movement? Check out this video:

5) What is gender neutral language and why should we use it? This is what the EU has to say:

6) Here are the UN guidelines for gender-inclusive language:

1. When the US was founded

3. The women who opposed universal suffrage

4. People who opposed women’s right to vote were

8. The women’s movement fought a long, hard struggle because

9. The EU and UN institutions believe that language

10. The EU and the UN believe that language

3) Choose the correct subordinating conjunction to complete the following sentences.

1. ________ (Before/After/Until) the Nineteenth Amendment was passed, women were allowed to vote.

2. Some women were against universal suffrage ________ (if/because/when) they were afraid to lose their privileges.

4. ________ (Because/If/Unless) all adults are allowed to vote, a society is considered democratic.

7. _______ (If/Whenever/ Wherever) you use the term ‘mankind’ instead of ‘humanity’, you are using gender-biased language.

4) Why do you think it is important to vote? What do you think you need to do to be a responsible voter? (60-80 words)

5) Do you think women are still discriminated against in our society? Is there discrimination against other groups of people? Write down your thoughts on the subject and support them with a couple of examples. (60-80 words) 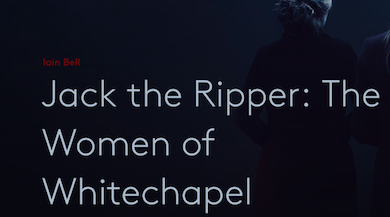 Jack the Ripper: The Women of Whitechapel

The opera, Jack the Ripper: The Women of Whitechapel, will be performed in London from March 30th to April 12th