Just five days into 2017, London exceeded its annual air pollution limit. London’s polluted air is a centuries-old problem. A group of young activists believe that too little has been done for too long. With their campaign Clean Air Now they hope to raise awareness of the problem and to pressure politicians to improve, once and for all, London’s air quality.
di Redazione
Per la lezione
Scarica il PDF dell'articolo
Scarica le soluzioni
Per scaricare questa risorsa devi accedere a myZanichelli

Just five days into 2017, London exceeded its annual air pollution limit. This means that in those five days dangerous quantities of pollutants were found in London’s air more times than is legally permitted for the whole year. Besides damaging the environment, air pollution causes several health problems. In the short term it produces conditions such as coughing and asthma, and in the long term it can lead to lung damage and serious diseases. Approximately 9,000 Londoners a year die prematurely because of air pollution. MPs called the situation a “public health emergency” and the new mayor of London, Sadiq Khan, promised to take action. He wants to make London one of the world’s greenest cities. But can he truly solve a centuries-old problem?

The problem of London’s polluted air goes as far back as the thirteenth century. At the time, the problem was coal smoke from chimneys: Londoners burned coal in their homes to cook and keep warm. This problem worsened as London became more populous. In 1661, writer John Evelyn said that the burning of coal had turned London into ‘Hell upon Earth’. In the nineteenth century, industries began pumping even more smoke into the air. This smoke mixed with the fogs of the Thames Valley and formed what became famously – or infamously – known as smog. London’s smog was full of soot and poisonous gases. This smog was so typical of London that it was called ‘London particular’, and it was so thick that it was also called ‘pea soup’. Attempts were made to pass laws to solve the situation, but without success. Then disaster struck in 1952.

In December 1952, due to special weather conditions, Londoners were trapped in the worst air-pollution event in the history of the UK. The Great Smog, or the Great Killer Fog, was so bad that flights were grounded, traffic restricted, and various events had to be cancelled. Firemen had to walk in front of their vehicles to see where they were going. The smog even seeped indoors. A performance of La Traviata at Sadler’s Wells was suspended because the audience couldn’t see the stage. The Great Smog lasted less than a week, but it killed 12,000 people. This tragedy made health and environmental concerns so urgent that parliament was forced to do something. In 1956 it passed the Clean Air Act, which introduced measures to clampdown on pollutants that caused smog. London’s air began to clear up, but over the years the old, visible pollutants, such as coal smoke, were replaced by new, invisible ones.

Some people think that politicians are once again taking too much time to solve the problem. A group of artists, photographers and 16 to 25-year-old volunteers decided to take action themselves, and they set up the Clean Air Now campaign. Over the course of the last few months, they have used large posters, billboards and street art to raise awareness about the illegal levels of London’s air pollution. They hung their posters and art in some of London’s most polluted areas. “The idea was to take billboard space for something other than advertising,” said one of the organizers. “Billboards, due to their size and scale, are a great way to talk about this issue – they hover over London just like the pollution itself.” Although today’s pollutants can’t be seen, 20 x 12-foot posters can! The activists hope that their action will support the mayor’s plan to clean up London’s air.

2) Look at these pictures of the Great Smog of London and read the captions:

4) Watch this other video to learn more about today’s situation:

GRAMMAR – Future forms (present simple, present continuous, will, shall, be going to)

1. Hurry up. Your flight for London will leave/leaves in one hour. 2. I’m sure you will have/have a wonderful time in London. 3. Shall we join/Are we joining the Clean Air Now campaign? I think we should. 4. The demonstration is going to start/starts at 3 pm – don’t be late! 5. It’s very cloudy today. Shall I get/Will I get my umbrella? 6. The pollution problem is so great that it is going to take/shall take ages to solve it. 7. Who knows if the mayor will succeed/is going to succeed in making London a green city? 8. I am meeting/meet the mayor tomorrow to tell him about our campaign. 9. She is coming/shall come tomorrow. We arranged to meet at the train station. 10. London’s air pollution is getting worse and worse. We are never breathing/are never going to breathe clean air in this city!

4) Do some research on one ecological disaster caused by humans. What caused it and what was done to remedy it? (60-80 words)

5) What could be done to fight pollution and/or improve the air quality of your town/city? (60-80 words) 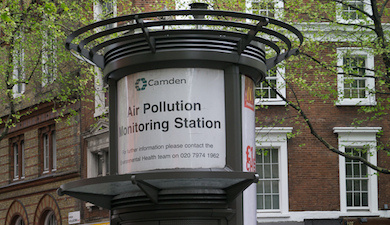