Looking for the Yeti and Bigfoot

Recently the Indian Army declared it had found footprints left by a Yeti. The claim renewed the debate over the possible existence of this legendary creature. Despite the lack of truly convincing evidence, belief in the Yeti, as well as in the American Bigfoot, is widespread and the reason for this might be more than simple scientific curiosity.
di Redazione
Per la lezione
Scarica il PDF dell'articolo
Scarica le soluzioni
Per scaricare questa risorsa devi accedere a myZanichelli
Last April the Indian army tweeted an incredible piece of news regarding one of its expeditions in the Himalayas. The tweet said: “For the first time, an #IndianArmy Moutaineering Expedition Team has sited Mysterious Footprints of mythical beast ‘Yeti’ measuring 32x15 inches [81x38 cm] close to Makalu Base Camp on 09 April 2019. This elusive snowman has only been sighted at Makalu-Barun National Park in the past.” The tweet was accompanied by pictures of large footprints in the snow. The tweet provoked many reactions. People who believe in the existence of the Yeti greeted it with enthusiasm. Many others, instead, considered the news totally unbelievable and said that the footprints were very flimsy evidence. Some even accused the Indian army of being irresponsible for making such ridiculous claims.

The Yeti, which means ‘wild man’, is a creature of Himalayan folklore, described as a very large, ape-like mountain creature. In the 1920s, English explorers were told about this mysterious being by locals after they discovered strange tracks in the snow. In 1951, the highly respected British explorer Eric Shipton took a picture of a huge and very detailed footprint in the snow near Mount Everest. The picture became a sensation, and many explorers travelled to the Himalayas to find the Yeti, also known in the West as the ‘Abominable Snowman’. Some attempts were very ambitious: American oilman Tom Slick headed a 6-month expedition with 500 porters. He even used bloodhounds to track the scent of the mysterious creature. Despite all these efforts, nobody found a Yeti. Scientists say that the Abominable Snowman probably doesn’t exist. They have analyzed many alleged Yeti hair samples, including a ‘Yeti scalp’ found in a Buddhist temple. Most belonged to known animals. Some came from a very rare species of Himalayan bear.

North America has its own version of the Yeti: Bigfoot, also known as the Sasquatch. Like the Yeti, Bigfoot is found in old legends and is described as a large ape-like creature. Its popularity exploded in 1967, when two men, Roger Patterson and Robert Gimlin, filmed a few seconds footage of a hairy female creature walking in a Northern California forest. Over the years, the mysterious Bigfoot has been caught on camera on other occasions, and many footprints and hair samples have been found. Yet all the evidence is controversial. The pictures and videos, for example, might be fake. Indeed, there are known cases of people dressing up in ape costumes and pretending to be real Bigfoots. Even the creature in the Patterson-Gimlin film might be a man in a costume. As with the Yeti, scientists find the evidence for Bigfoot unconvincing. So why do so many people still believe in the existence of these creatures?

Daniel Taylor, an expert on the Yeti, gives an interesting answer. He says that the belief in ape-like creatures began in the Victorian era after Charles Darwin published his theory of human evolution. Some scientists believed that, if humans descend from apes, then there had to be a ‘missing link’, a creature that was more than an ape but not yet a human. And maybe that missing link still existed. Many explorers and scientists travelled the world searching for it. This search for an ape-man was not just a scientific project. In a way, it was also a spiritual one. “The deep mystery at our core,” says Taylor, “is that we want to be connected to the great beyond. And we need symbols to help us understand the connection. That’s why we believe in God or angels or the Loch Ness Monster. Throughout human history, and across human cultures, we have developed messengers from the great beyond. Ultimately, that’s what the Yeti is.”
Useful links 1) Check out the Indian Army tweet (and some answers) and the pictures of the Yeti footprints: https://twitter.com/adgpi/status/1122911748829270016 2) Read these Wikipedia Simple English pages on the Yeti and the Bigfoot: https://simple.wikipedia.org/wiki/Yeti https://simple.wikipedia.org/wiki/Bigfoot 3) Here is Eric Shipton’s picture of the Yeti footprint: https://en.wikipedia.org/wiki/Yeti#/media/File:Eric_Shipton_yeti_footprint.png 4) Watch the original Patterson-Gimlin film (Bigfoot appears at min. 2.37): https://www.youtube.com/watch?v=OBTUQI60yqQ Here you can see Bigfoot in greater detail: https://www.youtube.com/watch?v=ngVH-7tMpjo 5) Read the interview with Yeti expert Daniel Taylor: https://news.nationalgeographic.com/2017/08/yeti-abominable-snowman-bear-daniel-taylor/
COMPREHENSION 1) Read the article and complete the sentences with the right alternative.   VOCABULARY 2) Complete the sentences with the following words. Put the verbs and nouns in the right form, if necessary. porter  *  bloodhound  *  core  *  elusive  *  scalp  *  link  *  the (great) beyond  *  ape  *  flimsy  *  to sight 1. A ______  is a dog with a very keen sense of smell. 2. A chain is made of many steel ______ . 3. The ______  beliefs of a person are his or her deepest and most cherished beliefs. 4. To prove the existence of the Yeti scientists need solid proof, like a body, not ______  evidence, like a footprint in the snow. 5. ______  is often used as a synonym for ‘monkey’, but technically it refers only to large primates such as gorillas, chimpanzees and orangutans. 6. Patterson and Gimlin ______  a Bigfoot in a forest. 7. The Yeti is considered ______  because it seems impossible to find. 8. Expeditions in the Himalayas often make use of ______ , people who carry the expedition’s equipment. 9. ______ refers to the unknown or the mystery of life after death. 10. The skin covering the head is called ______ .   GRAMMAR – Modal Verbs. 3) Choose the correct modal verb to complete the sentence. 1. The body of a Yeti must/would/may be undeniable proof of its existence. 2. Scientists would/can/should base their theories on solid evidence. 3. Believers in the Yeti say that one day a Yeti would/will/may be found for sure. 4. I am convinced that Patterson and Gimlin might/can/must have faked their Bigfoot video. 5. It’s easy to make a fake Bigfoot footprint, we will/would/could do it ourselves. 6. Bigfoot has been sighted in this forest; if we are lucky we might/must/would see it ourselves. 7. Scientists should/can/may analyze all evidence with an open mind. 8. Some people are so gullible that they would/may/could believe anything! 9. Searching for the Yeti can/should/ought to be a very disappointing enterprise. 10. The footprint photographed by Eric Shipton would/might/should be that of a bear.   SHORT ESSAY 4) Do you believe in the existence of the Yeti (or Bigfoot)? Or do you think it’s just a legend? Motivate your answer. (60-80 words) 5) Look at Eric Shipton’s picture or watch the Patterson-Gimlin film. Describe what you see and try to give your ‘scientific’ opinion. (60-80 words)
___ (Carlo Dellonte) (Image credits: pixabay and pixabay) 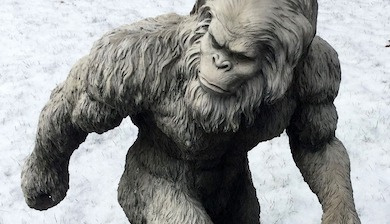