The origins of rugby (and football)

Rugby is an old sport and its origins are closely linked to those of football. In the early eighteen hundreds, ball games were a common pastime in English boys’ schools. Each school had its own rules, but most agreed that running with the ball in your arms was not allowed. According to legend, in 1823 Webb Ellis, a pupil attending Rugby school (in the town of Rugby, Warwickshire), picked up the ball during a match and ran with it, thus originating the distinctive feature of the rugby game. This story is so famous (even though it’s a myth) that the World Cup trophy is called the Webb Ellis Cup. The first rules of the game were actually written down in 1845 by other Rugby school pupils. Not all schools adopted them, though. So, in 1863, representatives from eleven schools and clubs met in London to write down a shared set of rules. The majority decided that running with the ball in your arms was not allowed. By doing so, they founded modern football. In 1871 other clubs decided they wanted to play a game where you could run holding the ball. This became modern rugby. Also the balls used in football and rugby became different. Football adopted a round one, which was easier to kick, while rugby adopted an oval one, which was easier to carry.

Rugby spread quickly in the English-speaking world. The first international matches were held in the late 1800s. In 1925, New Zealand’s team, also known as the All Blacks because of the colour of their jerseys, toured Britain, France and Canada, winning all their 32 matches, earning the title ‘The Invincibles’. Almost a hundred years later the All Blacks are still the team to beat. They are the current world champions, and they won the World Cup three times. That’s more than Australia and South Africa, who have two wins each, and England, which has one. The All Blacks are also known for a Maori dance they perform before each match: the Haka. This dance is meant to challenge and intimidate the opposing team. New Zealand is a ‘superpower’ in women’s rugby too. It won 5 of the 8 World Cups played so far. Women’s rugby fully developed only in the 1960s and 70s. This is because, before that, there was a lot of discrimination towards women playing contact sports.

One of the most distinctive aspects of rugby is a tradition the French nicknamed ‘the third half’. This is when the winning and losing teams meet for a post-match dinner or night out at the pub. It’s a way for players to socialise and become friends. Today, in the age of professionalism, this tradition is fading. Now most players are too competitive or busy to go out with their opponents. Yet, this year at the World Cup somebody will honour this old tradition. New Zealand’s coach Steve Hansen always invites the opposing team into the All Blacks’ changing room after the final whistle. He wants his players to be friendly and humble, whether they win or lose. These old-school values are, after all, still at the core of rugby, despite it’s a rough game on the pitch. As the saying goes: ‘rugby is a thug’s game played by gentlemen’.
USEFUL LINKS 1) Follow the World Cup on its official website: https://www.rugbyworldcup.com/ 2) What are the rules of rugby? Read them here: https://www.rulesofsport.com/sports/rugby.html or watch this video: https://www.youtube.com/watch?v=FOJejnPI0p0 3) Here are some interesting facts about the Rugby World Cup: https://www.sportsmirchi.com/rugby-world-cup-interesting-facts/ 4) Would you like to know more about the All Blacks’ Haka? https://simple.wikipedia.org/wiki/Haka You can watch it being performed here: https://www.youtube.com/watch?v=yiKFYTFJ_kw Did you know that other Pacific nations perform their own ‘war dances’? Have a look here: https://www.abc.net.au/news/2019-09-01/rugby-world-cup-haka-pacific-war-dances-dwayne-the-rock-johnson/11456828

1) Read the article and complete the sentences with the right alternative 1. The World Cup is 2. The whistle used for the opening match of every World Cup was first used 3. English school children in the early 1800s played 4. The story of Webb Ellis running with the ball is 5. The game of rugby owes its name to 6. Most World Cup winners are 7. The Haka is a dance 8. The tradition of women’s rugby is not as old as man’s rugby because 9. The ‘third half’ is 10. The third half

4) Have you ever watched a rugby match? What do you think of the sport? (60-80 words) 5) Is there a sportsperson that you like or admire? Is it for his/her sports skills or for the way he/she is in everyday life? (60-80 words)
___ (Carlo Dellonte) (Image credits: pixabay and Flickr) 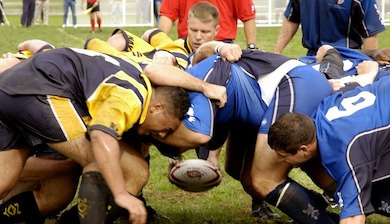