Last month, the most famous family in the world was probably that of Robert Kelly, a previously unknown professor of a South Korean university. Kelly and his family were the protagonists of one of the most viral TV fails in history, viewed around the world million of times. Interestingly, their family blooper raised not only laughs, but also some serious social debate about racial stereotypes.

Useful websites: 1) Here is the video of Robert Kelly’s interview and an article on the social debate it initiated: https://www.theguardian.com/world/2017/mar/12/viral-video-hijacked-by-children-sparks-fierce-debate-on-social-media 2) Here’s an excerpt of the follow-up interview with Kelly and his family. Check out the ‘read more’ link too: https://www.theguardian.com/science/2017/feb/15/winston-churchill-essay-alien-life-discovered-us-college-are-we-alone-in-the-universe 3) Here is the transcript of their press conference: https://asiansecurityblog.wordpress.com/2017/03/15/kelly-family-press-release-on-the-bbc-dad-viral-video/ 4) Here’s comedian Trevor Noah’s comment on “the greatest moment in the history of television. Ever.” https://www.youtube.com/watch?v=S_kV994hurQ 5) What if it had been a woman in Robert Kelly’s place? Check out this funny parody: https://www.youtube.com/watch?v=-Ojvk-4IcOE 6) Here’s a parody of the Kelly interview that plays on racial stereotypes: https://www.youtube.com/watch?v=7RvyNP_RSN0
COMPREHENSION 1) Read the article and complete the sentences with the right alternative. 1. Marion and James 2. Robert Kelly is Jung-a Kim’s 3. Kelly believed that his BBC interview was 4. The BBC 5. The BBC called Kelly again because 6. The family blooper happened because 7. Kelly said that after the interview 8. Kelly admitted that 9. Kelly considers his family 10. Kelly’s failed interview proved that   VOCABULARY 2) Complete the sentences with the following words. blooper  *  forceful  *  to spark   *  spoof  *  stereotype  *  off guard  *  to stage  *  to gatecrash  *  to jump to conclusions  *  frantic  *  hysterical  *  outright  *  media outlet  *  intruder 1. A humorous mistake on television or in a film is called a 2. I admire her very much: she has a ______ and determined personality. 3. You are judging them too hastily. You are ______ . 4. She was ______, acting out of desperation. 5. ______ means both very funny and emotionally uncontrolled. 6. A light parody is called a 7. An example of a ______ is saying that all Chinese people are good at kung fu. 8. ______ something means to produce it for public view; for example, you can ______ a play, an event or a protest. 9. The ______ got into the house through the window and stole the television. 10. He was not invited! He ______ the party. 11. ______ means completely and openly. 12. Lightning hit the tree and ______ a fire. 13. Newspapers, radio, television and the Internet are all ______ . 14. You caught me ______. I was not expecting to see you here.   GRAMMAR – Making questions 3) Look at the statements that Robert Kelly made during his press conference. Write the questions he was answering: The woman in the video is my wife, Jung-A Kim, not my nanny.   The first child to enter is our daughter, Marion.   The second is our son, James.   No, Jung-A did not use too much force in removing the children from the room.   No, I was not shoving Marion out of the way.   Yes, I was wearing pants. I choose not to stand, because I was trying to salvage the interview.   No, this was not staged.   No, we did not fight about the blooper afterward.   Our floors are hardwood, which is why Jung-A slid into the room.   We have no comment on the many social analyses of the video. SHORT ESSAY 4)  Do you think it’s acceptable to assume that Jung-a Kim was the children’s nanny, or do you think that such an assumption is an unfair stereotype? Explain. (60-80 words)   5) Kelly’s interview is just one of a long line of TV bloopers. Is there one that you know of and that you find particularly funny? Describe it. (60-80 words) 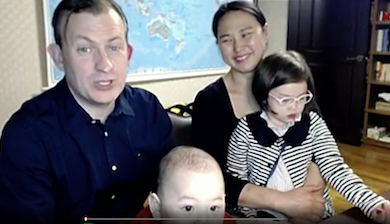