Twenty years ago, at the 1996 Atlanta Olympic Games, the UK won only 1 gold medal, finishing 36th in the medal table. After hitting rock-bottom, something changed: the UK started a dramatic climb to the top. This summer, at the Olympics in Rio it came 2nd with 27 gold medals. How did this amazing transformation happen? Learn the secrets behind the world’s new sporting superpower.
di Redazione
Per la lezione
Scarica il PDF dell'articolo
Scarica le soluzioni
Per scaricare questa risorsa devi accedere a myZanichelli

The 2016 Summer Olympics in Rio de Janeiro finished with no surprises at the very top of the medal table: the United States came 1st with 46 gold medals. The US has come 1st 5 times in the last 6 Summer Olympics. Its most famous athlete is probably the swimmer Michael Phelps who won 5 golds and 1 silver in Rio. That’s one person winning more medals than some entire countries – only 18 nations won more golds than Phelps did by himself! Other ‘usual suspects’ such as China, Russia, Germany, France and Italy were among the top 10 nations in the medals table. But there was one big surprise in 2nd place: the United Kingdom. The UK won 27 gold medals in a wide range of disciplines, from athletics to cycling, from rowing to gymnastics.

Rise to the top

This feat is incredible if one thinks of the UK’s Olympic past. Twenty years ago, at the 1996 Atlanta Olympic Games, the UK won only 1 gold medal, finishing 36th in the medal table. This was the UK’s worst Olympics after many bad ones. Never, since World War II, had the UK won more than 6 golds. After hitting rock-bottom in 1996, something changed: the UK started climbing up the medal table. It came 10th in Sydney 2000, 10th in Athens 2004 and 4th in Beijing 2008. In 2012 it hosted the Olympics in London and came 3rd. It is normal for a nation to do particularly well when hosting the Games, but the UK was the first nation to improve again in the following Olympics – Rio 2016 – where it came 2nd. The UK can now consider itself a “superpower” of sports. But how did this amazing transformation happen?

The causes of success

After the UK’s horrible performance in Atlanta, Prime Minister John Major decided that sports needed more funding and a different mentality. He used the money the government earned from lotteries to finance sports. A new approach was also adopted, called the ‘no compromise approach’: the UK would invest money and energies only in those sports that produced medals. “Why do we invest in medal success?” said Liz Nicholl, who works for UK Sport, the agency that funds sport across the UK. “We invest in medal success to create a proud, ambitious, active, healthy nation.” But is this really happening? Is the UK a prouder, more ambitious, more active and healthier nation than before? Do people exercise more if they see top British athletes winning medals at the Olympics?

Back in the 1960s and 70s, when the UK won very few medals, the Sports Council promoted the creation and expansion of local leisure centres. There, ordinary people could play sports without Olympic competition in mind. Today many of these centres are in financial trouble; they are closing or they are being converted into expensive, private facilities. This is partly the result of the ‘no compromise approach’: if the sport is not producing medals, it will get no funding. History proves that people exercise more if they have access to facilities, not if top athletes win Olympic medals. Indeed, the number of British people participating in sports has fallen since 2012. The UK faces a dilemma: is it better to have elite athletes win gold medals, or is it better to promote sports for all? Maybe both aims can be achieved. UK Sport has recently softened its ‘no compromise approach’ and money will be used to fund also those sports that do not produce medals. Hopefully the next Olympics – Tokyo 2020 – will see both successful British athletes, and a healthier nation, back home, cheering for them.

-  Do you want to know more about the Olympics? Here is the official website of the International Olympic Committee:

- This cool interactive diagram tells you how many medals each nation won in every Summer Olympics:

- These interesting graphs give you another break-down of Olympic medals. Check out the various sports. Is there a sport in which Italy dominates?

- Here are some fun facts about Rio de Janeiro, the city that hosted the 2016 Games: http://www.telegraph.co.uk/travel/destinations/south-america/brazil/rio-de-janeiro/articles/rio-2016-olympics-100-fascinating-facts-about-rio-de-janeiro/

- Here is the official home page of UK Sport:

- Did you know these interesting facts about the Olympics?

1) Read the article and complete the sentences with the correct option.

1. The 2016 Summer Olympics was hosted by 2. The nation that came 1st in the medals table at Rio was 3. The UK’s worst performance at the Olympics was 4. The UK’s best placing at the Olympics since World War II has been 5. The prime minister who helped British sports in 1996 was 6. Most of the funds that finance British sports come from: 7. If British athletes win lots of medals, says Liz Nicholl, 8. The “no compromise approach” has 9. Compared to 2012, today in the UK 10. The next Summer Olympic Games will be hosted by

4) Did you follow the Summer Olympics? Was there a specific moment or an event that you liked? Or was there an athlete that impressed you? Share your impressions and thoughts. (60-80 words)

6) Do some research to find out why a nation wins more medals than usual when it hosts the Olympic Games. (60-80 words) 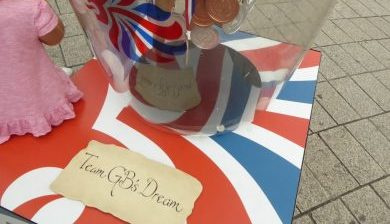