This year’s Halloween was a little different: lots of people didn’t dress up as monsters, but as scary clowns. The scary clown craze began months ago and it spread quickly across the US and the UK. Dozens of scary clowns appeared out of nowhere to frighten people. Learn more about this strange phenomenon and about the ancient art of clowning.
di Redazione
Per la lezione
Scarica il PDF dell'articolo
Scarica le soluzioni
Per scaricare questa risorsa devi accedere a myZanichelli

Fear is not a pleasant emotion, but most people like a little thrill in their lives. Some people might enjoy reading a horror novel, others might like riding on a ghost train in an amusement park. Strangely, being frightened can be fun. One of the year’s most beloved celebrations, Halloween, revolves around fear. On that day, many adults sit at home to watch horror films, and many children go trick-or-treating, dressed as scary creatures such as vampires, ghosts, zombies and witches. But this year’s Halloween was a little different. One outfit was particularly popular even if it wasn’t a traditional monster costume: this year lots of people dressed up as scary clowns.

The wave of ‘scary clowns’ began months before Halloween. In August, the people of Wisconsin saw an unkempt clown with black balloons walking the streets. In September and October, dozens of other scary clowns appeared across the US, the UK, Australia and other countries. Sometimes these clowns just wandered around looking scary. Other times they jumped out of nowhere and started chasing people. Sometimes they even frightened passersby with fake weapons. Most of these scary clowns proved harmless, but some took the joke too far and ended up injuring people. A few were arrested for “making a terrorist threat connected to ‘clown-related activity’.” This sounds ridiculous, but it’s not funny at all. Policemen have better things to do than arrest people dressed as scary clowns! Following police advice, many schools banned clown costumes from Halloween celebrations.

Nobody knows the reason for this scary clown craze. Some believe that it’s a way to celebrate the 30th anniversary of the horror novel It written by Stephen King. It tells the story of a group of kids terrorized by a mysterious monster. This creature often disguises itself as a clown called Pennywise. Before writing the book, King wondered: “what scares children more than anything else in the world?” The answer he gave himself was: clowns. Clowns can be ambiguous: who is hiding behind the face paint? Are their drawn smiles sincere, or are they the smiles of madmen such as the Joker, Batman’s enemy? If the recent wave of scary clowns is paying homage to the novel It, Stephen King is not grateful. He recently tweeted: “Hey, guys, time to cool the clown hysteria – most of them are good, cheer up the kiddies, make people laugh.”

Indeed, the professional clowns who want to make people laugh are worried by what’s happening. They say there’s a big difference between real clowns and people in scary masks. Their profession has a noble tradition: there were clowns already in ancient Egypt! Clowns believe that “laughter is health,” and with their acts they explore emotions such as happiness and sadness, but also hate and fear. A clown wants to teach people to face life and difficulties with a smile. They also teach resilience: clowns survive anything that’s thrown at them. Many clowns do good around the world. For example, Clowns Without Borders is an association of clowns who entertain and help children in war zones. Patch Adams, similarly, is a doctor who uses ‘clowntherapy’ to help sick children in hospitals. Although these professionals are worried by the scary clown craze, they are confident that they’ll survive. “We’ve been around for centuries,” they say. “We’ll still be here after these people in scary masks are long gone!”

Useful links 1) Read about the origin and history of Halloween: http://www.familyeducation.com/fun/history-halloween/spooktacular-history-halloween https://www.loc.gov/folklife/halloween.html

2) Learn more about clowns and scary clowns in this short video: http://abcnews.go.com/US/video/clowns-funny-scary-43146002

3) Find out how a man dressed up as Batman is chasing down the scary clowns: http://www.telegraph.co.uk/news/2016/10/12/man-dressed-as-batman-chases-killer-clowns-in-cumbria/

4) Learn more about the history of clowning: http://www.humourfoundation.com.au/resources/history-of-clowning.html

5) Read and listen to what professional clowns have to say about the scary clown craze: https://www.theguardian.com/culture/2016/oct/13/clowns-clown-craze-professionals-costume-sightings-phenomenon

7) Learn about Patch Adams and his work: http://www.patchadams.org/

1. People who like being scared probably enjoy celebrating 2. Traditionally, on Halloween children go trick-or-treating dressed as 3. The first scary clown was seen in 4. The scary clowns craze is 5. The police are not happy because 6. Thirty years ago Stephen King created a famous character: 7. Stephen King asked the people dressed as crazy clowns 8. Professional clowns are interested in exploring 9. Clowning has been around for 10. Patch Adams and his clowns work

4) Did you celebrate Halloween this year? Did you wear a costume? Write about what you wore and what you did. (60-80 words)

5) Which is the scariest mask you can think of? Explain why you find it so frightening. (60-80 words) 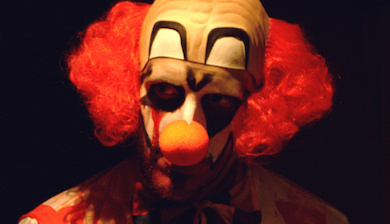