Lee was full of energy and ideas. He started working when he was very young. After a series of odd jobs, he began working for a comic book publisher, Timely Comics (later renamed Marvel Comics). It was 1939. He liked writing, but he felt that the comic books of the time were too simple. After many years of writing what he called “silly little comics” he was ready to quit, but his wife told him: “before you do, why don’t you do one comic book the way you would like to do it?” If his boss fired him it wouldn’t matter – he was going to quit anyway. Lee followed his wife’s advice. In 1961, he created an unusual team of superheroes called the Fantastic Four. It was a success. Lee then created the Hulk, Spider-Man, the X-Men and dozens of other heroes and villains. The artists who drew his comics often helped him in the creative process. The most famous was Jack Kirby, who had a very dynamic style of drawing. It was the beginning of the ‘Marvel Revolution’.

Lee reinvented superhero comics, making them popular again. He did more than simply invent new characters with special powers; he created three-dimensional individuals. His superheroes are not perfect. They have personal problems and character flaws. They have complicated relationships with their powers. The X-Men, for example, are a group of misfits who are the victims of discrimination. Bruce Banner, who transforms into the Hulk, doesn’t even want his superpowers. Peter Parker, the boy behind the mask of Spider-Man, is a shy, bullied school boy. When he first dresses as Spider-Man he uses his powers in an egotistical manner, and he doesn’t help a policeman catch a thief. The same thief later kills Peter’s uncle. Peter feels responsible and understands that “with great power there must also come great responsibility.”

All of Lee’s superheroes learn this lesson, but so did Lee himself. He knew that he was creating role models for his young readers. He used his comic books to entertain, but also to express positive values. Lee also wanted comics to ‘grow up’. His work inspired a new generation of authors who used comic books to tell more complex and mature stories. One such example is the comic book Watchmen, written by the Englishman Alan Moore, and published in 1986-7. Moore’s superheroes are so life-like and his story so sophisticated that Time Magazine put Watchmen in its list of the 100 best English-language novels published since 1923. Stan Lee once said: “Our goal is that someday an intelligent adult would not be embarrassed to walk down the street with a comic magazine.” His work was extremely important in making that possible.
Useful links 1) Read the biography of Stan Lee on Simple English Wikipedia: https://simple.wikipedia.org/wiki/Stan_Lee 2) Watch this tribute to Stan Lee’s life and work: https://www.youtube.com/watch?v=W5EVBhXfnUw 3) Read some of Stan Lee’s landmark comics (such as the first stories of The Fantastic Four and Spider-Man) at this link: https://www.marvel.com/comics/discover/546/stan-lee 4) Check out some of Jack Kirby’s superhero art here: https://whatifkirby.com/gallery 5) Listen to this review of the comic book Watchmen: https://www.youtube.com/watch?v=iqgPiFoWM4s 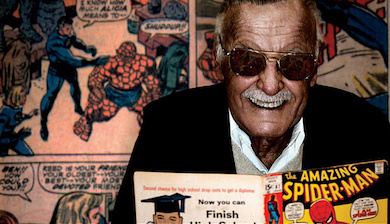