On 20 January the presidency of Barack Obama, the 44th President of the United States, comes to an end. His successor is businessman, television personality and billionaire Donald Trump. Few took him seriously when he decided to run for President, but his campaign proved very successful. Learn more about the American general elections and President-elect Donald Trump.
di Redazione
Per la lezione
Scarica il PDF dell'articolo
Scarica le soluzioni
Per scaricare questa risorsa devi accedere a myZanichelli

On 20 January the presidency of Barack Obama, the 44th President of the United States, comes to an end. Many Americans, as well as many people around the world, will miss him. Obama’s slogan, when he campaigned for the presidency eight years ago was ‘Yes we can.’ He believed that when people come together anything is possible. He is the living proof of this: he is the first African American to be elected President, and this was possible because millions of people, for decades, fought against racism and for civil rights and social justice. His policies as President were aimed at a fairer society. For example, he wanted to provide health care to those who didn’t have it. He also fought hard against unemployment and climate change. In foreign policy he favoured negotiations rather than aggressive action. In 2009 he won the Nobel Peace Prize “for his extraordinary efforts to strengthen international diplomacy and cooperation between peoples.”

Obama’s successor is New York billionaire Donald Trump. Trump comes from a very rich family. He will be the richest American President in history. He will also be the oldest: Trump is 70. He has been a businessman and real-estate developer. He built skyscrapers, palaces, parks, casinos, golf courses. Trump Tower is probably his most famous building: a very luxurious 200-metre building in Manhattan. In recent years Trump was also a television personality, hosting the popular programme The Apprentice where he judged the business skills of a series of contestants. Trump’s interest in politics grew over the years. He wanted to run for President already in 2000, but eventually decided not to. Few took him seriously when he decided to run again in 2015. Could a celebrity businessman with no political experience really compete against professional politicians?

Donald Trump was one of the Republican Party’s 17 candidates for President. Trump campaigned with the slogan ‘Make America Great Again’, appealing to the patriotism of Americans. Trump claimed that Washington was ‘broken’, run by corrupt politicians and controlled by lobbyists. He presented himself as an outsider who could ‘shake up’ the political system and give it back to the people. Despite being a billionaire, many of his electors said about him: “he’s one of us.” His critics said that he was just talking to the ‘belly’ of the nation, appealing to the fear, anger and pride of the Republican electors, often making unrealistic promises. Over the course of a few months, though, he emerged as the most popular Republican candidate, and he won the party’s nomination.

Person of the Year

At the general election Donald Trump faced the candidate of the Democratic Party, Hillary Clinton, the first woman to be nominated for President by a major US political party. She represented continuity with Barack Obama. They both belong to the same party, and Clinton’s slogan – ‘Stronger together’ – recalled the solidarity of Obama’s ‘Yes We Can’. Clinton’s critics said that she was part of the political elite, no longer in touch with the everyday problems of Americans. Most polls, though, said that she was going to win the presidency. They were wrong: Donald Trump won instead. Waiting to see what he will do as President, Time Magazine elected him ‘Person of the Year 2016’. Time gives this title to the year’s most influential person, for better or worse. “So which is it this year,” asks Time, “better or worse?” America is divided on the answer. Will Donald Trump, a person known for his unpredictability, be a good President? Only time will tell.

2) Explore the White House, where the President lives and works: https://www.whitehouse.gov/about/inside-white-house

3) Take a tour of the West Wing of the White House, where the President has his office: https://www.whitehouse.gov/about/inside-white-house/west-wing-tour

5) Learn more about the election of Donald Trump: http://www.timeforkids.com/news/election-remember/496771

3) Complete the sentences using the modal verbs will, may, might

4) According to you, what qualities should a political leader have and why?

5) Do some research on Barack Obama and Donald Trump, then compare and contrast them. 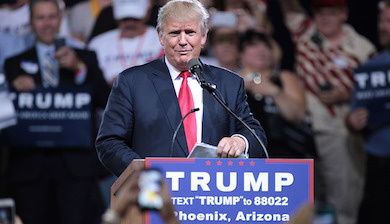