On April 22, Earth Day was celebrated in more than 200 countries around the world. This yearly event was first held in the US in 1970. Earth Day wants to promote the protection of the environment. Its organizers say that we all have to act, and act now. We stand on the edge of environmental disaster and what is at stake is our very survival.
di Redazione
Per la lezione
Scarica il PDF dell'articolo
Scarica le soluzioni
Per scaricare questa risorsa devi accedere a myZanichelli
In 1969 an accident happened on an oil rig off the coast of California. Between 13,000 and 16,000 cubic metres of crude oil spilled into the sea. The oil polluted the water and killed fish, birds and other marine animals. It was an ecological disaster, and it wasn’t the first one. Modern industrial society had been causing more and more damage to the environment. After the oil rig accident, American senator Gaylord Nelson decided that it was time for a great rally in defense of mother Earth, so he helped organize the first Earth Day, which was held on 22 April 1970. Some twenty million people participated. The organizers claimed that the world – our only home – was in grave danger. Famous journalist Walter Cronkite summarized their message: “half-way measures and business as usual cannot possibly pull us back from the edge of the precipice. […] What is at stake, and what is in question, is survival.”

Earth Day 2017 was celebrated in more than 200 countries. Festivals, rallies and all kinds of events encouraged people to be more environmentally friendly. Earth Day organizers stressed the importance of supporting politicians with a ‘green’ agenda, and they encouraged the development and use of green forms of energy, like solar and wind power. They also suggested some simple actions that everybody could take to help the environment, like planting a tree (or donating money to help someone else plant one for you), eating less meat, and stopping using disposable plastic. Education, they claim, should also play a part: a school is the perfect place in which to learn how to become more environmentally friendly. As the organizers of Earth Day write: “today’s students are tomorrow’s leaders.” This is a great responsibility but also a great opportunity to make the world a better place.
Useful links 1) Here is the Earth Day official website: http://www.earthday.org/ 2) Help Earth Day reach three billion ‘acts of green’: http://www.earthday.org/take-action/ 3) Learn about green schools and what you and your school can do for the environment: http://www.earthday.org/campaigns/education/ 4) Here are five more things you can do to help save the world: https://www.theguardian.com/lifeandstyle/2016/apr/19/earth-day-five-things-to-make-a-difference-plastic-paper-towels 5) How much do you know about the environment? Take a quiz: https://www.infoplease.com/science-health/environment/earth-day-quizzes-games-activities?gclid=CKiZ24GmwtMCFVAQ0wodBWoOyQ 6) Do you want to know more about the March for Science? Here’s its official website: https://satellites.marchforscience.com/

COMPREHENSION 1) Read the article and complete the sentences with the right alternative. 1. The oil spill of 1969 was 2. Walter Cronkite said that 3. The cause of pollution is 4. Scientists say that we are as dangerous as 5. Scientists claim that 5. Scientists are saying that we are 6. Earth Day was celebrated in 7. The March for Science 8. Earth Day is organized 9. Earth Day organizers in the importance of schools because schools   VOCABULARY 2) Complete the sentences with the following words. Put the verbs and nouns in the right form, if necessary. to injure  *  unpredictable  *  to respond  *  agenda  *  precipice  *  claim  *  oil rig  *  rally  *  commitment  *  to pollute 1. The politician’s ______ is the list of things he plans to do. 2. The workers got together in a ______ to protest against the government. 3. The edge of a steep cliff is called a ______. 4. The smoke from that factory ______ the air. 5. A ______ is a formal agreement. 6. ______ means to answer. 7. Scientists can prove their ______ with very detailed evidence. 8. I never know what she’ll do next. She’s ______. 9. ______ means to cause harm. 10. An ______ is a platform that has machinery that drills oil from underground.     GRAMMAR – Interrogative pronouns 3) Complete the sentences choosing the correct interrogative pronoun (who, whom, whose, which, what, where, when, why, how).   1. Who/Whom helped organize the first Earth Day? 2. When/What and where/how was the first Earth Day held? 3. Where/Why do scientists claim that the environment is in danger? 4. How/Where was the oil rig that caused the oil spill? Whose/Who fault was it? 5. How/Which successful was the March for Science? 6. Who/What was the message that the event tried to convey? 7. Which/Whom animals are risking extinction? 8. Who/Whom are you going to invite to the rally? 9. Who/What caused the extinction of the dinosaurs? 10. What/Where is the Paris Agreement and when/why is it important?     SHORT ESSAY 4) Look at the ‘acts of green’ listed on the Earth Day official website. Which ones can you do or are you already doing? In what way are these actions important for the environment? (60-80 words)   5) Do you think it’s easy to be ecologically friendly, or is it difficult? Explain. (60-80 words)
— (Carlo Dellonte) (Image credits: NASA, flickr and Tom Hilton, flickr ) 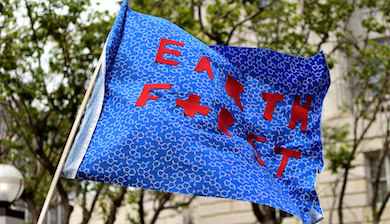