The remains of Samuel Taylor Coleridge rediscovered in a cellar

The memorial plaque of Samuel Taylor Coleridge is located in St. Michael's Church in Highgate, a North London suburb. The exact location of the coffin, however, had long been forgotten and was only rediscovered thanks to recent excavations.

The English poet, who died on the 25th of July 1834, was buried in the chapel of a Highgate school near where his last home was located. In 1961, the coffin was transferred to the crypt of St Michael's Church in a dry and safe place protected by a brick wall. Over the years, the exact location was forgotten until recent excavations revealed its presence.

The space where the coffin is located initially housed a seventeenth-century cellar, which was incorporated into the crypt of the church, itself built in 1831.

A memorial plaque to Coleridge hangs outside the church and in the middle of the nave is a stone slab inscribed with an epitaph that he wrote himself:

Beneath this stone lies the body of Samuel Taylor Coleridge

Stop, Christian passer-by!-Stop, child of God, And read with gentle breast. Beneath this sod A poet lies, or that which once seemed he. O, lift one thought in prayer for S. T. C.; That he who many a year with toil of breath Found death in life, may here find life in death! Mercy for praise-to be forgiven for fame He asked, and hoped, through Christ. Do thou the same! 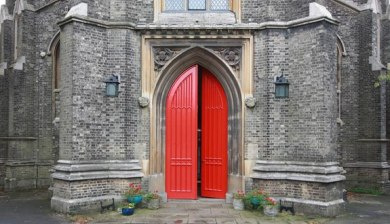